This budget proposal seeks to compensate current and future contributors to the DevNTell series to ensure the platform continued growth and success.

The DevNTell series is one of the most consistent and successful efforts of the Developer Guild (and DAO) since its inception in December of 2021. It’s become a weekly staple in the Developer DAO community and in some cases the first big platform for many members to showcase their work. The platform has also had the pleasure of hosting company representatives and high profile individuals looking to market and/or highlight their product such as The Graph, tea.xyz, and Ceramic Network just to name a few.

The DevNTell playlist garners the second highest volume of views on the Developer DAO YouTube channel only rivalled by the web3con recording series. 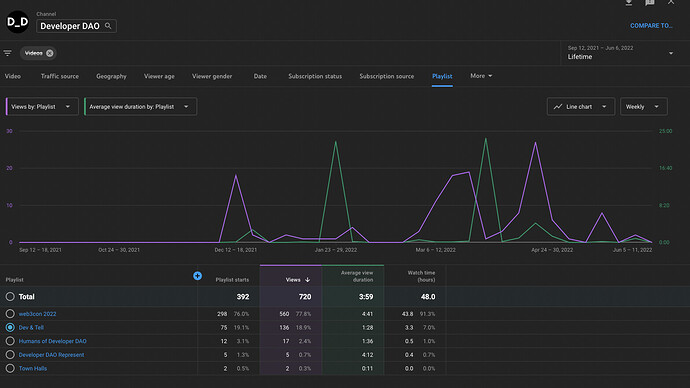 DevNTell is a 30-minute window for members of the DAO to showcase something they are passionate about or have been working on. This could be an awesome project you’ve been working on, demonstrating unit-testing best practices, automation goodies, smart contracts, how to structure a project, etc… Basically, if you’ve got a passion for something, this is your opportunity to share it with the community.

The series began as a community oriented effort to allow those without a voice on social media to be able to showcase their work to an audience and often served as the first real “big stage” for many folks to practise their pitches. DevNTell will always continue to be community first as that is the bread and butter that has made it successful. Our members are what makes us Developer DAO and they should have a stage to show the web3 community their excellence.

The DevNTell recordings are posted under the Developer DAO YouTube account; however, this can be expanded to other platforms too (i.e Spotify)

DevNTell has largely sat on my (Narb) shoulders since the beginning with me taking charge of finding speakers, hosting/recording/uploading almost all talks and creating/distributing POAPs to all attendees. This is not sustainable for the long haul assuming the platform grows like I envision it will as well as in the volunteer basis that it’s running on now. The DevNTell series has the potential to be the prominent Developer talk/showcase platform in all of web3 with an outreach that can span the entire industry.

Potential expansions of the platform include:

In it’s current format DevNTell has the following work structure:

But if we start implementing some of the bigger expansions mentioned in the prior section, then these numbers will start to ballon.

In this budget request, the DevNTell platform is looking for the “standard” 15 $CODE/hour allocation

No changes to current DevNTell format

Following the above we get the resulting $CODE allocation

1 Person who hosts/books/uploads and explores expanding the reach of the sessions:
15 $CODE * 4 hours contribution/week * 4 weeks * 1 person = 240 $CODE per month

At the moment this is the team:

Narb - all the things

There won’t be any impending changes to how DevNTell is structured at the moment; however, we can look to action on at least one of the potential items for expansion assuming there is adequate funding provided to this initiative.

In the case of a budget surplus, the excess $CODE can either go back to the treasury or be carried over to subsequent seasons

Some suggestions:
-Include specific bounties for the potential expansions. For example, the website may need basic UI design first of the landing page. That’s one bounty you can include in your budget. Once that bounty has been claimed, you can create another for the development of the website based on that design.
-It’s not clear how much $CODE you are asking for. Please be clear about it.
-How can a newcomer contribute? defining not critical tasks that can be out there for a while is a good way for newcomer to start contributing.

Awesome, thank you for the feedback Erik! I’ll go back and revise this over the weekend to include your recommendations

Added me as the supporting budget steward @Narb - is the final $CODE calculation correct- 1320 $CODE?

Thank you so much for the support man! That 1320 was $CODE per month but have since updated the figures to come up with the following breakdown:

1 Person who hosts/books/uploads and explores expanding the reach of the sessions:
15 $CODE * 4 hours contribution/week * 4 weeks * 1 person = 240 $CODE per month

Edited to include my steward support.

DevNTell hit on 3 out of the 4 milestones that it set out for itself with great success:

The initiative will not be able to deliver on the milestone of launching devntell.xyz and would like to defer it to subsequent seasons

The one caveat to this milestone achievement is that it’s very likely that DevNTell was not the only factor in this jump but rather a collective effort from all the content creators who post onto our Channel (workshops, humans of D_D, etc…). 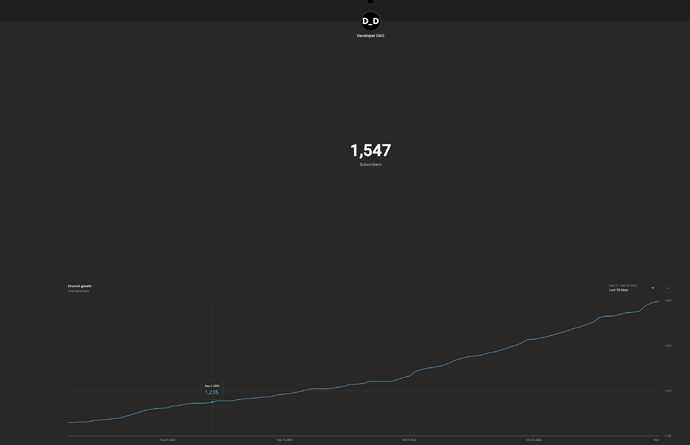 Launch DevNTell on at least one other platform (i.e Spotify)

Launch devntell.xyz having all previous sessions available for viewing

As the devntell.xyz website milestone will not be completed or started this season I am proposing an amendment to the budget allocation to reduce allocation by one distribution:

Excellent, I’ll keep this in mind as the next season rolls around, thanks!